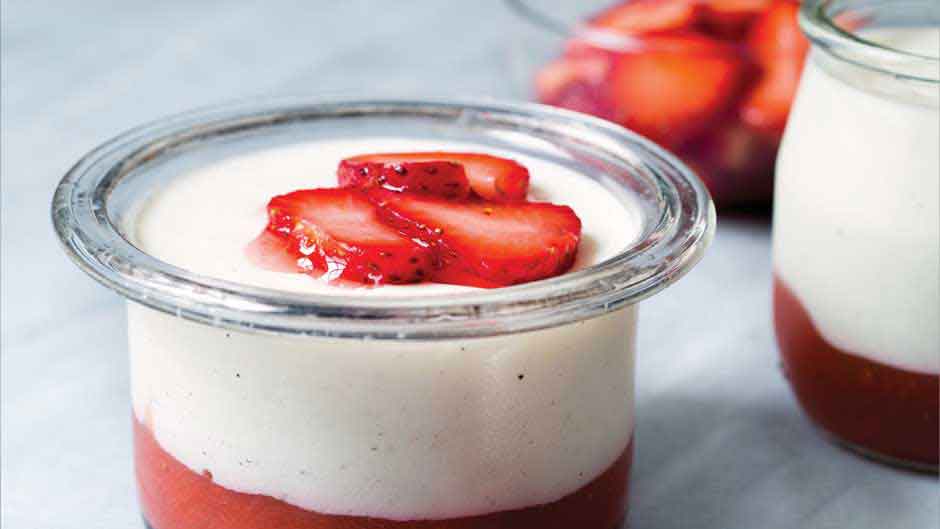 I like to serve this panna cotta parfait-style, in clear glasses, with the ruby-red fruit puree on the bottom. Diners plunge their spoon down through the creamy layer and bring up a smidgen of sauce with each spoonful, no inverting required. However, you can also prepare the panna cotta in conventional ramekins without the sauce, unmold them at serving time, and then spoon the sauce around them. I’ve described both methods. Either way, you’ll have a little sauce left over, just enough to enjoy with yogurt the following day.

Note that the recipe doesn’t use an entire package of gelatin. The peculiar measurement I have recommended yields just the right consistency: not too stiff, not too soft. You can make the sauce and the panna cotta a day ahead, but I find the panna cotta’s texture most luscious the day it is made.

Put the rhubarb, sugar, and orange juice in a saucepan. Bring to a simmer over medium heat, stirring to dissolve the sugar. Cover and reduce the heat to low. Simmer gently until the rhubarb has softened completely, about 10 minutes. Watch carefully, as the mixture wants to boil up and over. Stir in the strawberries and cook, uncovered, stirring often, until they soften slightly, about 2 minutes. Puree the mixture in a food processor or blender. Refrigerate, covered, until chilled.

Put the milk in a small saucepan. Using the tip of a paring knife, scrape the vanilla bean seeds into the milk, and then add the pod to the milk as well. Bring to a simmer over medium heat. Cover, remove from the heat, and let steep for 30 minutes. Remove the vanilla bean pod.

In another bowl, whisk together the yogurt, sugar, and salt. Sprinkle the gelatin over the warm milk mixture and let soften for 5 minutes. Return the saucepan to medium heat and bring the milk to a simmer, whisking constantly until the gelatin completely dissolves. Cool for 5 minutes.

If you prefer to serve from glasses, parfait-style: Spoon about 2 tablespoons of the strawberry-rhubarb sauce into the bottom of each of six 6–to 8–ounce glasses. Divide the yogurt mixture equally among the glasses. Cover the glasses with plastic wrap and refrigerate until set, at least 3 hours. Garnish each glass with a fresh sliced berry, if desired.

If you prefer to serve unmolded on a plate: Lightly grease six 6–to 8–ounce ramekins with vegetable oil. Divide the yogurt mixture equally among the ramekins. Set the ramekins on a tray and cover with plastic wrap or another tray. Refrigerate until set, at least 3 hours. To unmold, run a thin knife around the perimeter of each panna cotta. Place an inverted serving plate on top. Grasping the plate and ramekin with both hands, invert them and give a little shake. The panna cotta should slip out. Spoon 2 tablespoons of the strawberry-rhubarb sauce around each panna cotta, garnish with fresh berries and a mint sprig, if desired, and serve immediately.

Draining dramatically improves the texture, making any yogurt thicker, creamier, and more mellow by removing whey. Draining also extends the yogurt’s life by removing water and lactose. Reducing the yogurt’s lactose deprives bacteria of their food source. To drain homemade yogurt, chill it thoroughly first until it is firm. Drain it as soon as it is cold. Store-bought yogurt has already been chilled, so drain it immediately after opening.

Line a large sieve or colander with a triple thickness of dampened cheesecloth or with Plyban, a reusable cheesecloth made from a food-grade resin.

Set the sieve or colander over a bowl to collect the whey. Gently pour the yogurt into the lined sieve or colander. Cover with a plate or cloth—you’re just protecting the yogurt, not pressing it—and refrigerate. Drain the yogurt until it has the consistency you like. After an hour, it will be noticeably thicker, and I usually stop at that point.

Scrape the drained yogurt into a clean container, cover, and refrigerate. Wash the cheesecloth or Plyban well in hot, soapy water; rinse well and air-dry. You can usually get two or three uses out of cheesecloth before it frays. Plyban is much longer-lasting and easier to clean. If you drain the yogurt more than you intended, no problem. Simply whisk some of the whey back in until you have a texture you like. 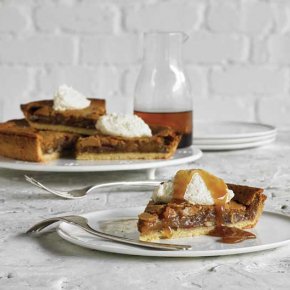 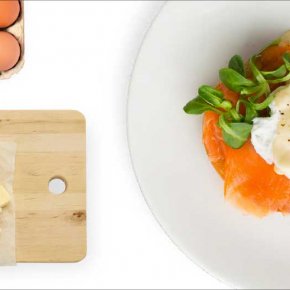 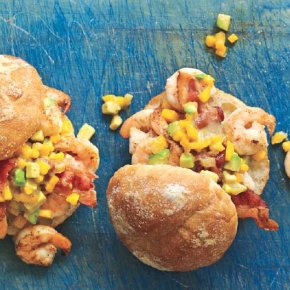